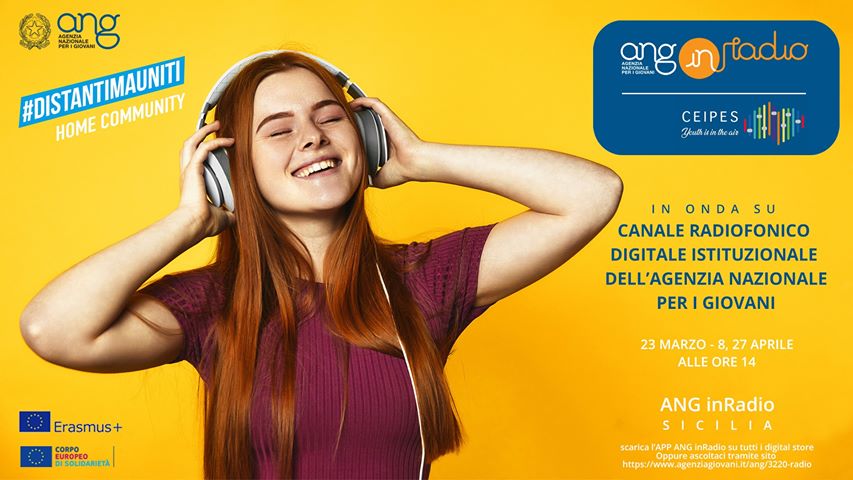 With a press release issued today, the ANG – National Youth Agency wanted to recall the great commitment shown by all associations involved in the ANG InRadio program, financed by the Agency itself and aimed at creating 44 local “antennas” distributed in 13 Italian regions, united, through the medium of web radio.

The project that also involves our association with the web radio Ang in Radio CEIPES Youth is in the air is still producing content, shared thanks to the hashtags #distantimauniti and #HomeCommunity, with the same commitment and the same desire, despite the serious emergency that our country is facing. All this also thanks to the great work of our volunteers of the European Solitary Corps.

Below the press release sent today by the National Youth Agency regarding Sicily:

The ANG InRadio institutional digital radio network of the National Youth Agency, made up of 44 local “antennas” in 13 Italian regions and animated by 600 young people, takes the field in full coronavirus emergency with solidarity initiatives in favor of the community, in particular of the weakest and the elderly. The various territorial associations to which the radio broadcasters belong, collaborate in the activities.

Among the projects being carried out in Sicily – which has 3 stations managed by 36 young people involving 15 thousand of their peers – the activity of People Help People, which in collaboration with the Municipality of Palermo, are making playful videos to entertain children and the elderly, while for the kids some videos on gardening, social garden, sports laboratory and a laboratory on new technologies. Also in Palermo, the CEIPES on their Ang inRadio frequencies are involving the volunteers of the European Solidarity Corps to do some insights on the Coronavirus theme and online English courses.

“The story of these days is also made up of many small stories of social commitment of our volunteers who give us hope, of boys and girls who are working for the community, especially the weakest, the elderly and the needy – declares Domenico De Maio, general director of the National Youth Agency, the government agency supervised by the Prime Minister and the European Commission, which manages the European Erasmus+ and European Solidarity Corps programs in Italy – They are the young people of our country who give us the charge and encourage us, who in times of difficulty have chosen generosity, support for their local community so as not to leave anyone behind. It is precisely from young people that the country will have to take the best energies to start again “.

We also remind you that you can follow all our podcasts through the official account of our web radio. It is also possible to listen to the entire ANG inRadio network every day from 8am to 8pm via a free downloadable app on the IOS or Android store or via the website www.agenziagiovani.it.