ALL IN – the road traveled with many ideas for the future 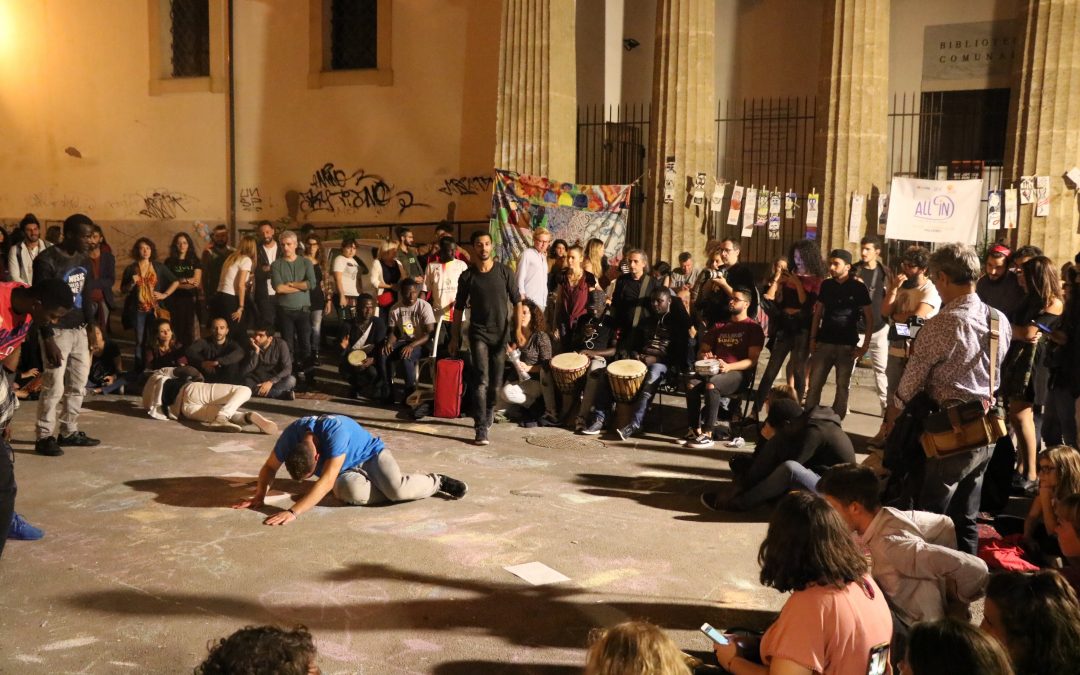 All in is a project promoted by Ceipes in collaboration with Arte migrante, funded by the Italian National Agency for Youth, through the fund “What do you want to do when you will be young? Your future starts now! “, a project that believed in art as a tool for building inclusive communities and, like a “self-fulfilling prophecy”, generated a creative wave based on intercultural dialogue that involved 30 young people , boys and girls with different socio-cultural backgrounds.

The path has seen the creation of 6 artistic workshops, such as creative writing, music, dance, theater, photography and illustration which were followed by meetings led by expert trainers and a group of 10 young people in the role of ‘organizers’; the laboratories have been created to offer a creative path of training and personal growth through teamwork and experimentation of personal skills through expressive arts.

What has encouraged the aggregation and participation of young people has been the creation of a welcoming, non-formal and creative place where everyone has felt stimulated, valued and in power. Some of the participants had previously met the world of expressive arts: Achraf learned to play guitar through youtube and he sings, Modou played percussion in his country of origin, Aurelia discovered the theater a bit by chance; others, like Ansou, Malick, Emran, Sarjo, were moved by the curiosity to discover something new and make friends. The motivations of the participants were very varied, but it was possible to find a common denominator: the desire to know themselves and find the most suitable means to give themselves full voice and to act in the community as protagonists.

Thanks to the facilitation of Margherita (theater), Angelo and Rosa (illustration), Gioacchino (creative writing), Giuseppe (photography), Benedetto (music) and Marta (dance), people who have turned their passion into a profession, the participants have created a common project that included the individual artistic aspirations of eachone  and that was finally shared with the local community on the occasion of Ballarò Buskers, the street artists festival, last October 20th in Palermo. A conclusive scenario was created on the theme of the “road” for which everyone has been called to “bring out” their own meaning of the word with the use of the instruments of the heart: the arts.

Landscapes and narrow alleys, stripes of color on fanciful faces, spontaneous prose of life, decisive tones and penetrating looks in a movement of bodies and rhythms in a circle. These are the elements that characterized the final performance of the group “All in”, showed to the community within Arte migrante event, as a space for meeting and knowing each other  through artistic sharing.
The video was screened during the event ALL IN – Final results and sharing of practices on 30th of October at the space of Montevergini, a moment of sharing the results of the experience in which space was given to the testimonies of those who participated in the project and to other realities of the territory that use art as an instrument of empowerment and social inclusion.

The project “All in – art for inclusion” has also given the chance to involve 22 representatives of the various Arte migrante groups in Italy in the final meeting, contributing to the growth of synergy within the network itself and, above all, an exchange of experiences and points of view that has greatly enhanced the use of the universal language of art in informal and non-formal gathering places.
Because the end of a successful project is also the beginning of a new path, through “All in” it was possible to create a theater-cinema laboratory space within the Rise – Lab, the center of social innovation of Ceipes realized within a property confiscated from the mafia, a resource in the hands of young people who will have the opportunity to continue to cultivate their passions and curiosities in a stimulating, welcoming and activating place.

WATCH THE FINAL VIDEO OF THE PROJECT:

WATCH THE GALLERY OF THE FINAL EVENT OF SHARING RESULTS

More information about the project: ART, SHARING AND INCLUSION: “ALL IN” IS STARTING!