Artambiente: The Rubbish Museum of Palermo 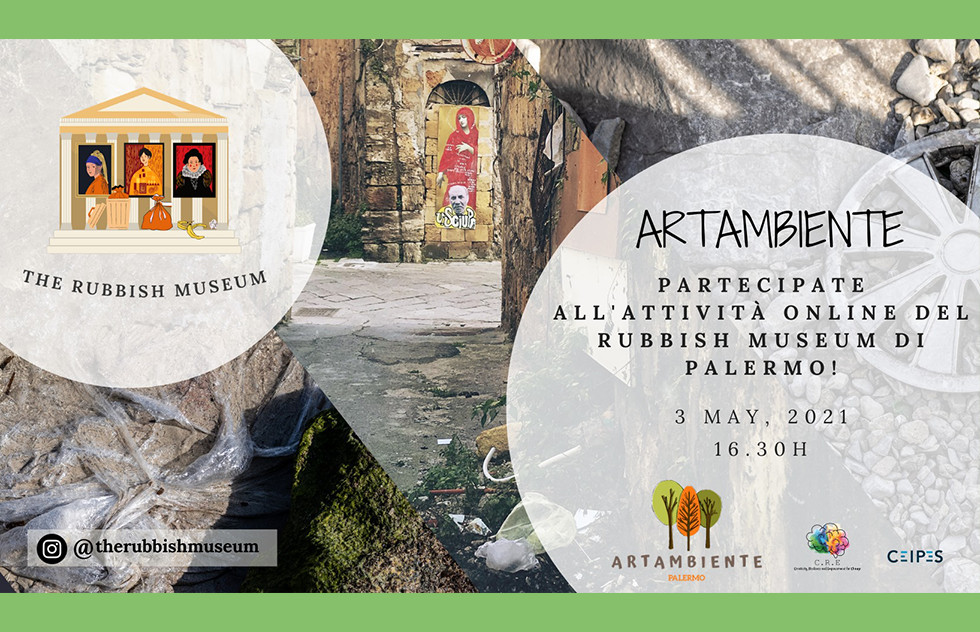 The Rubbish Museum of Palermo is an activity carried out within the ARTAMBIENTE project, that is an ESC solidarity project, began in May 2020, aimed at raising awareness on ecological matters in the city of Palermo.

The latter also took place in Palermo, following the path already traced from the other activities by the previous project ‘Artinsieme’, looking at the preservation of the environment, the redevelopment of neighborhoods to which public administrations pay less attention, and the ecological use of artistic expression.

Beautiful and full of charms and history, Palermo is nonetheless a city strongly affected by high levels of pollution in its streets. Hence, our initiative has firstly been embodied by the creation of an Instagram account in which we post daily pictures of polluted streets and areas of Palermo that people sent us in private messages with the name of the different venues where those photos have been taken, thus giving birth to an online museum.

In order to sensitize on this topic, and to publicize our initiative throughout the city we organised two workshops. The first one aimed at introducing participants to our project through debate, ice-breaking activities, and description of our main objective with this online museum. It was a great opportunity to ask people their opinions on the situation in Palermo regarding the pollution, and to start thinking of new strategies to implement in order to solve this issue in the long run.

Among the plans of action we thought of, the ‘Rubbish Map’ strategy arose for our second workshop, and which goal was to show the different recycling spots usable in the city. We presented this as a virtual map assembling four layers: the first one contains all the locations in which the Instagram pictures have been taken, and the pictures themselves. The second presents the points of oil collection that exist, while the third shows the areas where people can leave their bulky, as well as their electronic devices. Finally, the fourth layer presents the ‘Palermo Differenziata’ plan, which is a project put in place by the city to implement the separation of the different kinds of rubbish. Therefore, following a weekly calendar, the door-to-door waste collection has come into existence, affecting the areas of the city in different periods of time since 2011 until today.

The next stages of the Rubbish Museum activity are to be discussed between the co-founders. Meanwhile, we continue to feed our beautiful Instagram account, and to call people to share as much as possible our initiative, and to send us pictures and potential ideas we could work on together. We can already observe how our community is continuously growing at a very fast rate, and we have no doubt that a great and positive impact will come out of it.