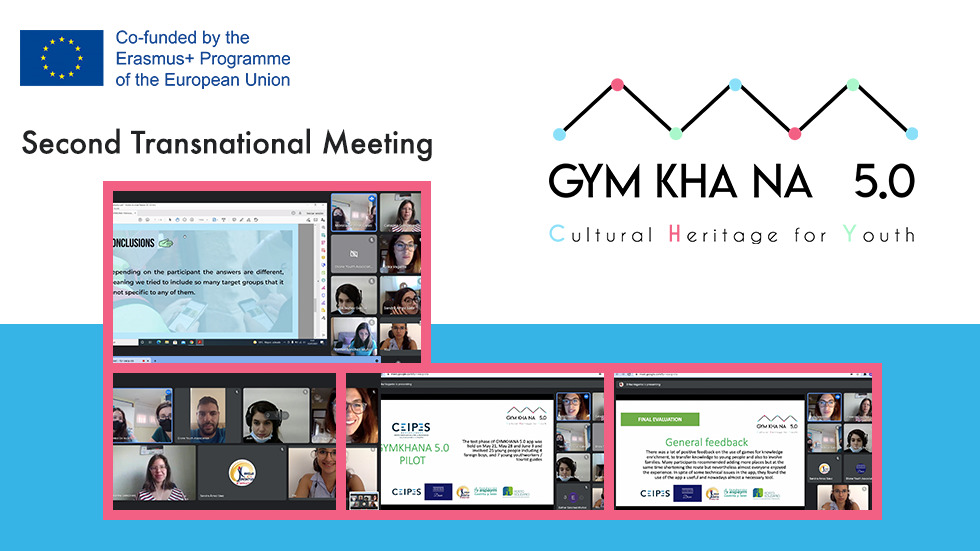 On July 12 the second transnational meeting of the project GYMKHANA 5.0 – CULTURAL HERITAGE FOR YOUTH took place.

The meeting was held online due to the COVID 19 pandemic that forced the partners to carry on the project online for most of its duration.

The partnership has worked very hard to create an innovative methodological tool that can help young people to deepen and improve their knowledge of the European heritage. For this reason, the app GYMKHANA 5.0 was born. Through 5 different paths, it is proposed as a tool to know 7 culturally relevant places in 5 specific cities of the partner countries, using an innovative methodology such as Gamification. For months, the partnership has been preparing the different paths, based on the principle of learning by playing, which has adapted to the use of a mobile app accessible to all.

During the meeting, among the different topics, we talked about the different tests of the app that were held in the previous months in the cities of the different countries. Each partner has involved 25 young people in testing the app and they were able to give their feedback. This last one was analyzed during the meeting thanks to the support of the project coordinator. This moment of comparison was important to understand what improvements needed to be made in the app to ensure its quality. Each partner reported some qualitative information about the test and then thanks to the support of the partner Fundacion Aspaym Castilla Y Leon, the improvements will be added, and the app will finally be ready to be launched online.

The partner CEIPES has also illustrated some local dissemination strategies giving a piece of advice to the partners to ensure that the app can reach the direct and indirect target groups of the project at local level. Actually, the project aims to involve different local stakeholders who can support the project and the dissemination of the app with young people.

Furthermore, another topic of discussion concerned the Handbook that will be released together with the app; this will show the methodology used and how it was developed during the project.

During the final phase of the meeting, the partners also talked about the possibility of meeting in September for the Multiplier event that should present the app officially. This could be a great moment for the partners who even remotely have been working hard to succeed in the goals of the project.

For more news about the project, please visit the Facebook and Instagram page of the project and our website, now in all languages of the consortium.