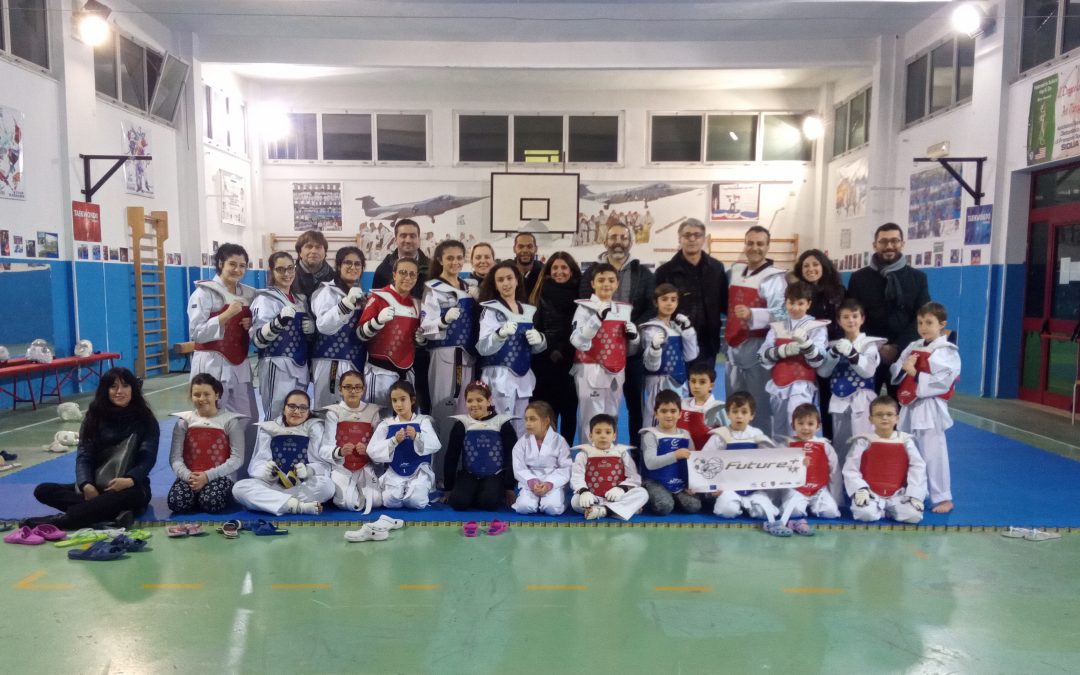 Few days ago, the third transnational meeting of the project “Future + Future for Children”, funded by the European Union for the Erasmus Sport program, was held in Palermo, hosted at the offices of CEIPES.

The aim of the project, based on the exchange of Best Practices, is to promote social inclusion through sport for children living in the disadvantaged and marginal neighborhoods of European cities.

The solid partnership that has been strengthened during these months of activity, is composed by CEIPES – International Center for the Promotion of Education and Development, the Greek association EILD – European Institute for Local Development, the applicant association “Club Lluita Olimpica La Mina” in Barcelona (Spain) which, together with the other partner “Club Gimnastica Gervasio Deferr”, carries out very important actions in one of the most disadvantaged areas of Barcelona, ​​welcoming in their gyms all children that otherwise would risk to be involved into the dangerous circuit of the illegality and marginalization, offering them training courses in the sport disciplines of gymnastics and fight, through which they teach important values ​​such as respect for each other, teamwork and sense of belonging, also allowing all the children who attend La Mina Club to have important ambitions. Indeed, they have managed to form Olympic and European champions and, nowadays, their gyms represent a reference point, as well as prestige, for families and especially for children living in that neighborhood.

The same actions are carried out by the other partner “ASM – Association Sportive Montferrandaise Clermont-Ferrand” (France), a sport association founded about a century ago by Marcel Michelin, the industrial owner of the homonymous tire factory, which now offers the opportunity to all citizens of Clermont-Ferrand and surroundings, to practice many sports, such as Rugby, in which they are national champions, gymnastics, fight and many others.

During the meeting in Palermo, a delegation of partners, firstly has visited the gym “Palamangano” in via Leonardo Da Vinci, where are currently hosted the trainings of athletes from the municipal gym of Atletica Pesante located in the district of Borgo Nuovo, currently under renovation. The “Antonio Fabra Palermo Athletic Club”, since its foundation in 1952, embraces the sporting panorama of Greco-Roman fight and has given birth to several national and even Olympic champions. Affiliated to FIGKLAM and managed by the President S. Gozzi and vice president and technical manager of training Pippo Fecarotta, a national champion of Greco-Roman wrestling, the club and their managers, have as main purpose to involve children in sport activities, young people and adults from the Borgo Nuovo district, which certainly has many difficulties within it, through schools and the word of mouth of those who have chosen to live a life marked by the values ​​of respect and education to civilisation, which sports as the fight, although apparently it does not seem, transmit and promote.

The same delegation, right after, has visited another important reality in Palermo, the sports club ” Il Drago e la Tigre Arti Marziali A.S.D “, affiliated to FITA and FIHAP, strongly desired and created by Rossano Marraro, a citizen of Palermo who passionate by much time of martial arts and being himself a 4 ° Dan instructor of Taekwondo and Master 4 ° Dan of Hapkido, has had the noble idea to offer courses aimed at children, teenagers and adults, taking place in a school gym, in the Montegrappa-Santa Rosalia district of Palermo. For the partners was enough to take part in a Taekwondo training session to understand how, by now, the children and Rossano, their coach, have become a real team, a point of reference for each other, thanks to the practice of healthy and true sport, based on strong values ​​such as the school education that Rossano takes to put in the first place in the lives of children and young people who train. Also in this case, thanks to the tenacity of Rossano and the team of coaches, it has been reached high levels in the field of sport competitions. Indeed, the company now boasts numerous national and European champions.

The meeting in Palermo has therefore represented an important resource for all partners that enrich reciprocally their knowledge, bringing out new project ideas and collaborating in a cohesive and harmonious way for the success of this project and many others that will surely come!

Future+ is going to finish on June, in Barcelona (Spain), where all the partners will go to attend a conference during which a handbook will be presented and whose drafting is already underway, and which will certainly be helpful and inspiring to anyone who approaches the world of sport for children and social inclusion through it.