CEIPES opens its doors for the closing conference of the Rise Lab Project! 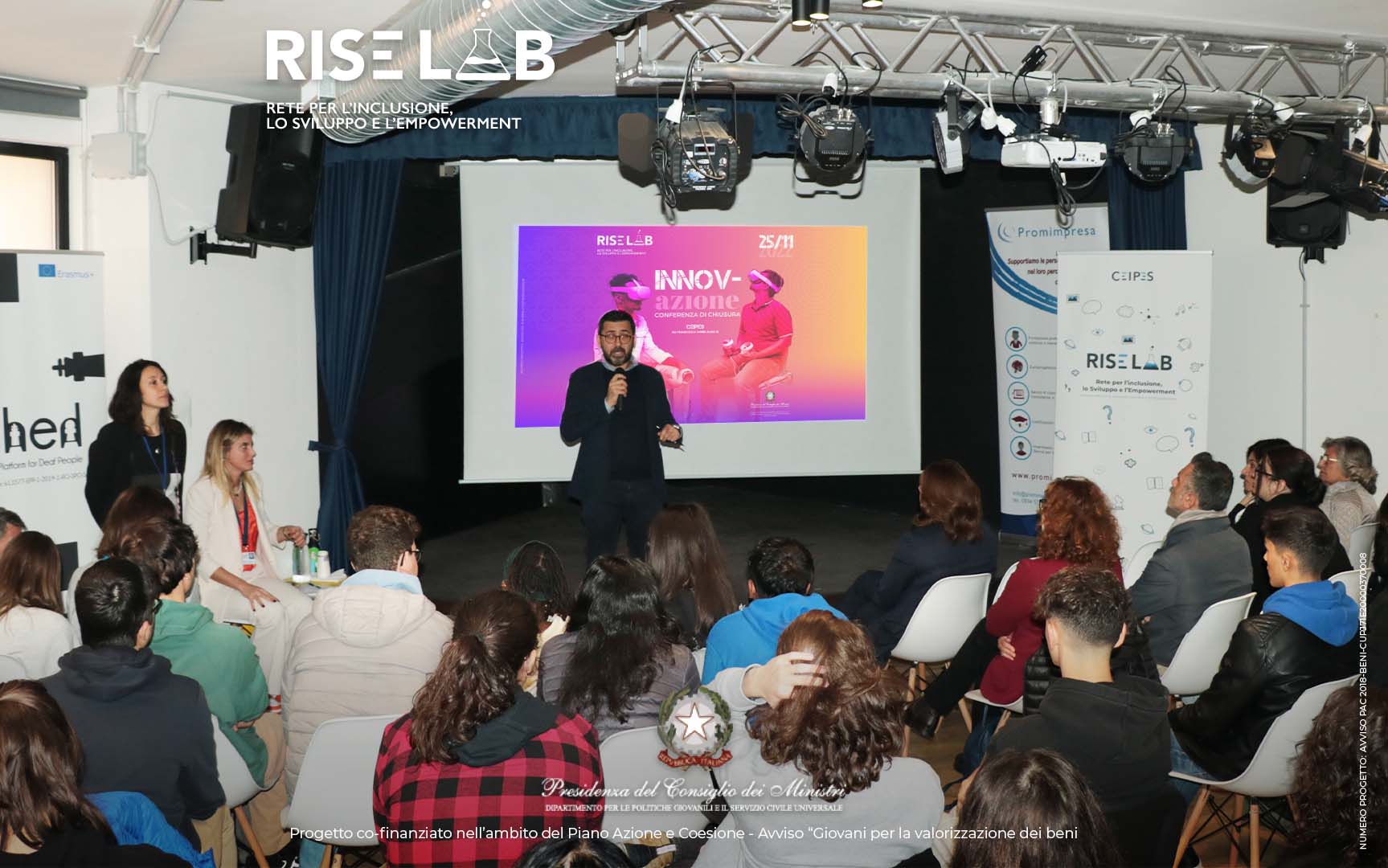 The Rise – Lab project was created to contribute to the redevelopment of an asset confiscated from the mafia entrusted to CEIPES in 2017. A former warehouse in via Francesco Maria Alias, 20, in the Uditore district of Palermo, has been transformed into a multipurpose center for social inclusion and cultural regeneration, active locally and internationally.

This project has made it possible to carry out structural improvements to the building and to create new spaces at the service of the community, helping to generate an ever-stronger interconnection between the local and the international dimension, within which CEIPES has been operating for many years.

Thanks to the Rise Lab project it was therefore possible to create a center of social innovation, made up of integrated, innovative, and sustainable paths, aimed at promoting individual and collective empowerment and the artistic-cultural expression of the individual as well as the community.

For the Rise-Lab Final Conference, CEIPES had the honor of hosting Maria Carolina Varchi, Deputy Mayor and Councilor for the Budget, Confiscated assets, and legality of the Municipality of Palermo. By participating in this important event, the Municipality has shown its support, trust, and proximity to CEIPES and the activities it carries out for the development of the Uditore district and the entire city. University professors also took part in the closing conference; representatives of local associations and organisations; students and teachers of the Ninni Cassarà Linguistic High School and finally citizens interested in the topics covered.

Participants in the event were able to fully immerse themselves in the new spaces and closely observe the structural improvements made to the property thanks to the project. Users visited the MADE – Museo Analogico Digitale dell’Empowerment – and its laboratory rooms set up inside the CEIPES premises. The “concept” of MADE is divided into three different information paths, born from an in-depth analysis of the Sustainable Development Goals of the UN Agenda 2030. During the museum exhibition itinerary, which extends along the entire surface of the Center, users interacted with various technological tools, including augmented and virtual reality, analogue and digital tools.

The students present took part in different educational workshops, developed ad hoc starting from the themes of MADE: sustainability and respect for the environment, gender equality and identity, migration and interculturality.

These workshops aim to stimulate the five senses in a journey of discovery of one’s potential and encourage the development of transversal skills, using non-formal education techniques, combined with various pedagogical learning tools. The participants also experimented with the educational games designed and developed by the students of the Ascione institute during the implementation period of the Rise Lab project, under the guidance of facilitators and expert game designers.

All the proposed activities and the didactic, artistic, and educational products created within the Rise Lab project aim to stimulate the individual and collective development of young people, social regeneration and encourage reflections and behaviors of active citizenship.

Even after the end of the project, the entire center will continue to be managed in a self-sustainable way, encouraging the involvement of young people from the area.

The closing conference of the Rise Lab therefore represents a huge milestone for the entire CEIPES staff. Indeed, all the spaces designed and built will remain available to the community and will allow different target groups to deal with innovative/educational paths aimed at promoting the personal growth of each individual.