A huge success for SWING, winner of 2020 European Language Label

On Monday 21 December 2021, CEIPES – International Center for the Promotion of Education and Development – participated in the award ceremony of the European Language Label 2020 in the vocational training sector in Rome.

This important recognition came following the results produced within SWING – Sign for Inclusion Gain – project activities, ended in May 2020.

SWING project (2017-1-IT01-KA202-006157), lasted for 32 months and has as the main objective the development of language and communication skills necessary for interaction between workers and employers. At the same time, the project aims to support employers and people with hearing problems in learning sign language in three different sectors: tourism, furniture and cooking.

SWING has led to the creation of:

SWING project has produced significant results, in line with European policies for multilingualism. In fact, not only people with hearing problems can benefit from the video dictionary but all those individuals who want to take advantage of a tool to interact with different languages, based on alternative communication channels, which allow them to relate to the deaf community. The cross-linguistic and specific learning of the three sectors contributes to the promotion of professional mobility opportunities for members of the deaf community.

The main tool provided by SWING is the video dictionary, the latter allowing those who use it to develop new lexical skills. Users who access the app or platform can learn new words, memorizing both the sign and the written form. In addition, the use of the English language allows the accessibility of the video dictionary at European level.

The award ceremony was full of testimonies. Roberto Gualtieri, mayor of Roma Capitale TBC, and Christian Greco, director of the Egyptian Museum in Turin, kicked off the event.

Subsequently, the participants attended a meeting between some Italian Ministers and several young protagonists of Erasmus +. Specifically, the following authorities intervened: Maria Cristina Messa – Minister of University and Research; Patrizio Bianchi – Minister of Education; Fabiana Dadone – Minister for Youth Policy; Andrea Orlando – Minister of Labor and Social Policies and finally Valentina Vezzali – Undersecretary of State to the Presidency of the Council of Ministers with responsibility for sport. Subsequently, the National Agencies intervened for the Erasmus + 2021/2027 program.

In the afternoon, the Erasmus + quality projects were awarded, including Swing project.

Maria T. De Monte and Manuel Muzzurru from the State Institute for the Deaf in Rome (ISSR) accompanied them. Manuel is a video editing technician with hearing problems who has been collaborating with ISSR since 2009. The latter entertained the audience by talking about his experience with European Erasmus + projects and his involvement during the implementation of Swing project. Manuel is also actively participating in the research and video editing phases of the new Swing 2.0 project, a follow-up born from the enormous success of Swing.

SWING 2.0 aims to follow in the footsteps of its predecessor by simplifying – through innovative and free tools developed independently – the learning and use of basic sign language in different work contexts, the use of which could favor the integration of deaf community at various levels.

During the awards ceremony, Manuel explained how the SWING design idea responds to the real needs of people with hearing problems. In fact, outside the signing deaf community, hardly anyone knows sign languages. This training gap precludes the possibility of starting a process of inclusion of potential deaf workers: before Swing, there were no dictionaries with specialized technical terms in different working sectors.

SWING project was therefore awarded the European Language Label by virtue of the added value to the existing training offer and for the focus on the professional inclusion of members of a group at risk of exclusion, such as the deaf community. The results of SWING project are in fact accessible to all and facilitate communication between employers, hearing workers and deaf workers. In addition, deaf people thanks to it already have and will have the opportunity to learn words and expressions of other sign languages, promoting their mobility and improving employment opportunities across national borders. 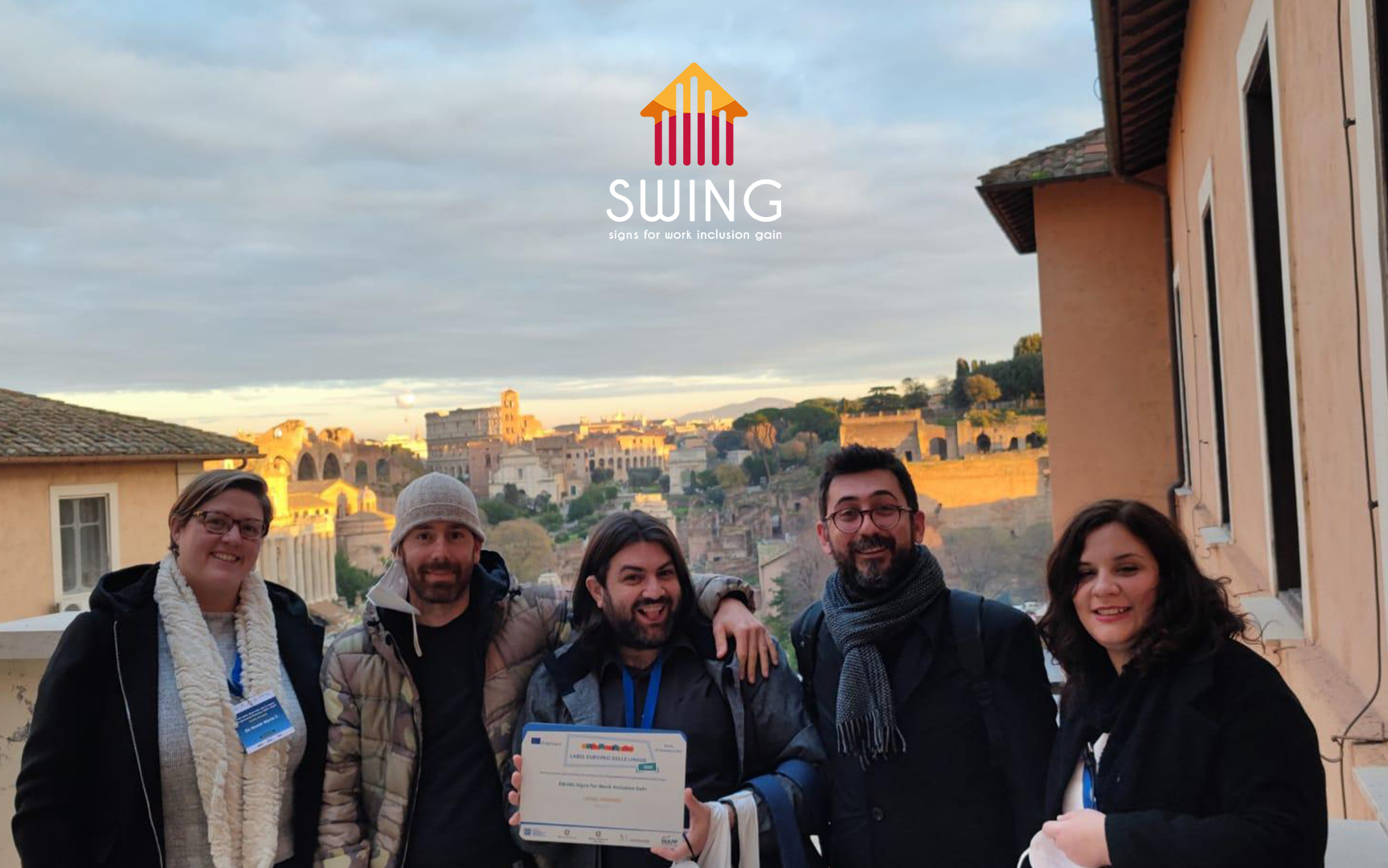